The Anglican and Methodist Church of St Matthew Rastrick

Many do not realise that St Matthew's has its own War Memorial outside the main door to the Church in memory of  Fallen Sons of Rastrick who were connected with St Matthew's Church.

A war memorial erected to the memory of those who were connected with St Matthew's Church, Rastrick, and who made the supreme sacrifice in the Great War, was unveiled on Wednesday evening. The ceremony was not, as has been the case at the unveiling of many war  memorials, of an elaborate or outstanding character. It was extremely simple; there were no bands, no sounding of trumpets, no military  uniforms, but it was in no wise less sacred and sincere. 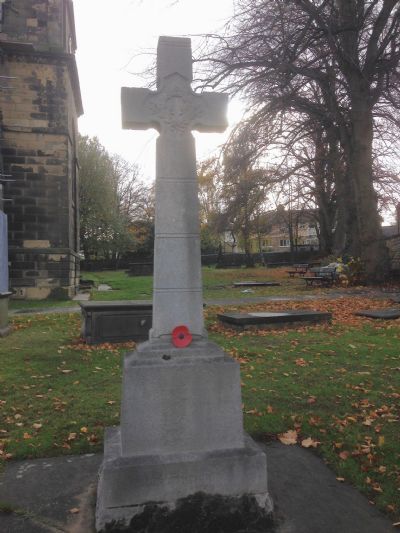 The memorial cross was designed and executed by  Frank Crowther, monumental sculptor, 53 Gooder Lane Rastrick. It stands 9ft high, is of Hopton Wood stone, and stands on a landing given by Messrs. Bentley and Smith. At the base are the words ‘Rest in Peace’. Inside the cross is a laurel wreath.

The Hopton Wood stone which has been used comes from Derbyshire, and so nearly approaches marble in its nature that is will take a polish, and is both durable and pleasing to the eye. The cenotaph, which reflects great credit on Mr. Crowther bears the names of 31 men who had been connected with St Matthew’s, the letters being cut and filled in black with red capitals.

The intervening  years between 1922 and 2020 have not been kind to the Hopton Wood stone and much of the inscriptions has been lost, or almost lost.

An extract from  the 'Churchyard ' section of 'A History of St Matthew's':

Inscriptions on the weathered memorial are difficult to read. 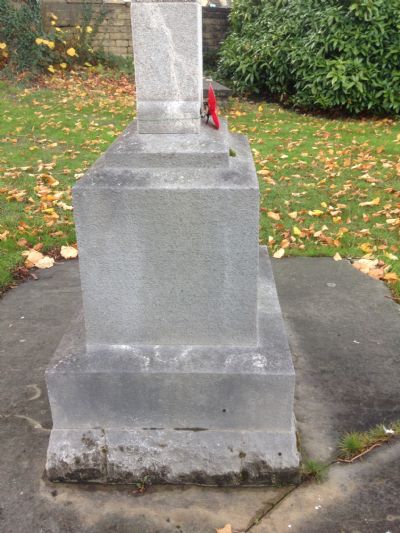 On the east face the names of the following can be made out :

A Press cutting of 30 June 1922 also includes the name of Pte John R. Booth, but it is difficult to see where his name is inscribed. However wreaths were laid in his memory at the memorial unveiling ceremony on the 28th June 1922. 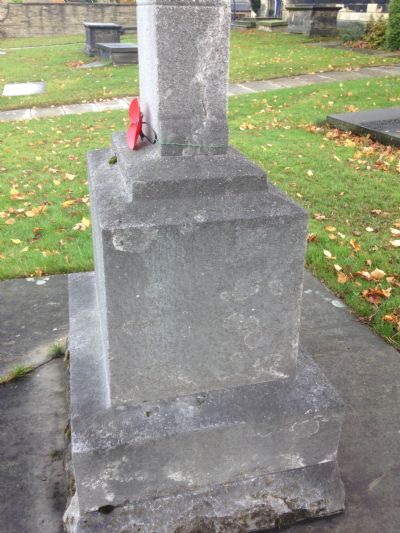 On the west face there are also names -  extremely difficult, if not impossible, to read.

Research has revealed that the list for the West Face of the memorial reads :

On the south face the following names appear to have been added to the memorial after the initial carving was carried out :

All these thirty-three men were connected in some way with St Matthew’s Church.

To find out more about these gallant soldiers, where they lived and how they died follow the link to Details of the St Matthew's soldiers who died during the Great War 1914-18

On the north face is inscribed:

“To the Glory of God and in sacred remembrance of

At the going down of the sun and in the morning

We will remember them.