The Anglican and Methodist Church of St Matthew Rastrick

St Matthew's soldiers who died during World War I

In Memory of the Fallen Sons of St Matthew’s Church, Rastrick

Details of the St Matthew's soldiers who died during the Great War 1914-18, and whose names are recorded on the War Memorial or whose remains are buried in the Churchyard 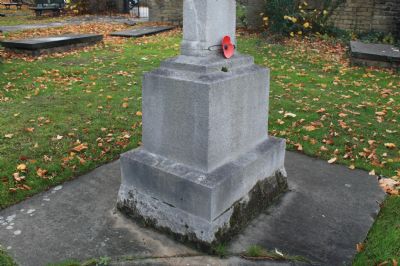 Pte. Dixon Berry of the West Yorkshire Regiment was killed in action on the 2nd November 1916 at the age of 40 years. He was the son of John Henry and Emma Berry of Cliffe Buildings, Rastrick. Dixon worked as a tailor for the Brighouse Co-operative Society and was a Yorkshire Champion crown-green bowler. Dixon enlisted in the Spring of 1916 with the Yorkshire Regiment No. 29082, West Yorkshire No. 43566. He was buried in a dug-out by a shell while he slept on the 2nd November 1916. A memorial service was held for him in Rastrick Church on the 3rd December 1916

Son of Robert and Mary Anne Booth of Dewsbury Road, Rastrick,  lived at 112 Rastrick Common. Married to Eliza Jane (later Mrs Mcllwaine) on 25th May 1901; they had four children. Worked with Brighouse Co-op Coal Dept. Active in Carters’ TU. Enlisted September 1914 in King’s Own Yorkshire Light Infantry No 18431. York and Lancaster No 19730. Wounded, treated at Field Dressing Station. Disappeared with ambulance carrying him to rear.

Lance Corporal Tom Booth No. 5863 of the 2nd Battalion Duke of Wellington’s Regiment was born and educated in Rastrick. He was married to Anni Booth and employed as a warehouseman. Tom was captain of the Rastrick AFC. Anni and Tom lived at 10 Folly Road, Cowcliffe. Tom enlisted on 5 May 1914, but was sadly killed in action near Ypres on the 8th November 1914 aged 36 years. He has no known grave, but is commemorated on the Menin Gate Memorial to the Missing.

124 Highbury, Rastrick; native of Southowram. Married Mary Anne Stott at St Matthew’s Church Rastrick on 25th January 1904, with whom he subsequently had  4  daughters.

Lance Corporal Arthur Garlick was baptised at St Matthew’s on the 20th June 1897. He served as a Lance Cpl. in the West Riding Regiment. The son of Mr & Mrs W. Garlick of 425 Lytham Road Blackpool, he lived at 15 Castle Terrace, Rastrick. He was educated at Rastrick Grammar School from 1909 to 1911, and later worked as a clerk in the offices of the Brighouse Co-operative Society. Arthur enlisted in February 1915 as No. 201505. He suffered from multiple wounds on 19 November 1917 on the Anzac Ridge near Ypres, and sadly died 36 hours later after  an operation. He was buried at Lyssenthoek Military Cemetery aged 20 years. His family gave its name to Garlick Street in Rastrick.

Lived at 12 Field Lane, Rastrick. Married. Formerly quarryman for Bentley & Kaye.  Working at Barnburgh Colliery when he enlisted at Mexborough April 1916 No 25074.

He lived at 124 Crowtrees Lane, Rastrick and played for the Rastrick Association Football Club and Cricket Club. Leonard was employed as a spinner by T Helm & Sons of Spout Mills, Rastrick. Service number 40471, he was killed at the Battle of Warlencourt, Somme aged 25. (BEcho 8Dec1916 {p} SD10)

Pte. Edward Knapton was born in 1882, the  son of Abraham and Elizabeth Knapton. Edward lived at 6 Thomas St, Rastrick and worshipped at Bridge End Congregational  Church.  He was a dyer's labourer  working at Brookfoot Dyeworks.(cotton dye-works). [1911]. Edward enlisted in 'Brighouse Chums'

October 1914 No 201159. He was a member of RAOC Royal Army Ordnance Corps. During World War 1, he served as a Private with 6th Battalion Duke of Wellington's (West Riding Regiment).  Invalided home September 1917. He died 10th October 1918, killed by an exploding grenade in an accident on a bombing range in the North Riding of Yorkshire and later  buried in Rastrick Churchyard on 15th October 1918, aged 36. (BEcho 18Oct 1918{p} SD38 WGBE Yorks 585) , [Name not included on the St Matthew’s Memorial]

Born on 29th September 1892, son of Henry and Martha Marshall, he was baptised at St Matthew’s Church, Rastrick on the 6th November. Employed at Thomas Helm & Sons, Spout Mills, Rastrick he was a prominent rugby footballer and a member of the Rastrick Cricket Club. He is commemorated on the  Vis-en-Artois Memorial  (Vis-en-Artois British Cemetery).

Son of Mr and Mrs W. Pamment, Herbert lived at 12 Brick Terrace, Gooder Lane,  Rastrick. He was unmarried. He was a member of St John’s Church choir and later at St Matthew’s Church and was connected with the Rastrick Church institute. He was apprenticed to J Blakeborough & Sons. He enlisted in June 1918 with service number 77686, but was killed in an attack on Neuvilly, Selle River (about 3 weeks before the Armistice). He is commemorated on the Vis-en-Artois Memorial, aged 20. (BEcho 15 Nov 1918 {p} Sd19 wMBE Reg 16 p 5)

Sgt. John Earnshaw Rider of the 9th Battalion Duke of Wellingtons West Riding Regiment was killed in action on the 25th April 1916 401/409

Formerly of Redmire, Wensleydale, he lived with his Aunt and Uncle at Stott Field Lane, Rastrick. He worked for John Smith & Sons, Badger Hill Mills, Rastrick. John enlisted in September 1914 with service number 11455; he was killed by shellfire aged 22. (BEcho 5May 1916 {p} SD38) He is commemorated on the Ploegsteert Memorial, Berks Cemetery Extension.

Pte John Willie Skitmore of the Duke of Wellington’s West Riding Regiment, Service no. 20043 died on the 12th October 1916.

In 1911 he was living with his two brothers and sister at the house of Jesse and Alice Mitchell, 5 Raynor Road, Rastrick and worked as a dyer’s puddler, employed at Messrs Thornton, Hannam and Marshall, at Brookfoot Dyeworks

With no known grave, he is commemorated on the Thiepval memorial.

Brighouse. No 306801. Military Medal ‘for gallantry and devotion to duty in the field, it being stated that, he along with others, held a position, which was being stormed by the enemy, until reinforcements arrived’  in the attack on Marcoing on 30th December 1917.  (BEcho 6Dec 1918 SD38) 23

2nd Lt William Henry Smith of the Royal Field Artillery was killed in action on the 23rd April 1917.

He was the only son of Albert Edward and Mary Emma née Crossley Smith. In 1911 the family lived at Ridge House 100 New Hey Road. He was employed as a wool sorter. William Henry was buried in the Cojeul British Cemetery.

Pte Herbert Southern of the 1st/4th Battalion Duke of Wellington’s West Riding Regiment was killed in action by an explosive shell on 16th October 1915, aged 20 years. Before enlisting he was employed at the Oaks Green branch of the Co-op grocery in Rastrick.

He was one of the sons of William Henry and Kate Southern, living at 134 Thornhill Road, Rastrick, when he enlisted. He is buried in Bard Cottage Cemetery, Belgium.

He lived at 5 Raw Hill, Rastrick and was married with 2 children. He was a member of the Foresters Friendly Society and employed as a silk dresser for Wood Bros & Sons of Thornhill Briggs, Brighouse. He enlisted in August 1914 with service number 192832. Serving with the Special Company (gas) in the Royal Engineers, he was gassed and wounded in 1917. Then he was hit by a shell fragment at night, aged 29  (BEcho 19Jul1918 {p} SD4)

He lived at 7 John Street, Birstall, but his parents, Mr & Mrs. G. Stirzaker, were at Bowling Alley, Rastrick. He was married on the 24th January 1910 at St Matthew’s Church Rastrick, to Martha Elsey, daughter of local shepherd John Elsey. Employed as a farm labourer by J. Jowett, Woodhouse, he enlisted in October 1916 with service number 38187. A Lewis-gunner, he was killed by shell-fire aged 33. He is commemorated on the Arras memorial. (BEcho 11 May 1917 {p} SD24 WMBE Reg 20 p 21)

2nd Lieut. Oswald Sutcliffe was born in Halifax in 1896 the son of Frederick and Mary Anne Sutcliffe of Croft Hollow, Rastrick. He was baptised at St Matthew’s Church, Rastrick on 15th September 1896. He was educated at Rastrick Grammar School from 1904 to 1910, Sedbergh College and Wadham College, Oxford University and intended to become a clergyman. Oswald also lived with his aunt, Miss Sutcliffe, in Far Headingley. During World War I, Oswald enlisted and was attached to the King's Own Yorkshire Light Infantry. He was killed in action on the 3rd November 1916, aged 20 and buried at the Hébuterne British Military Cemetery in France . Oswald is commemorated in a memorial tablet placed by his aunt on the west wall of St Matthew’s Church and in a memorial window in St Chad’s, Far Headingley. and St Matthew’s memorial.

Lance Corp William Richard Sutcliffe of the Highland Light Infantry was killed in action 19th August 1917 aged 23. Although he was living with Mrs Stannard at Calder View, Sunny Bank Road, Brighouse before enlisting, his mother lived at 8 Walker Square, New Hey Road, Rastrick. Before joining up he was employed at Messrs. Smith's Dyeworks, Huddersfield.

He lived at 29 Gooder Lane , Rastrick. Married, he worked as a bootmaker for his father at Birds Royd, Rastrick. He enlisted in December 1916 with service number 29969. He was killed in the Ypres salient.  Buried at Amar Communal Cemetery later at the Bedford House British Military Cemetery Aged 32 (BEcho 12 Oct1917 {p} SD38 WGBE Belgium 167)

Sam was the son of George E. and Edith Thornton and lived at 3 Bottom of Town, Rastrick. He was unmarried and a member of the Rastrick Church and Sunday School. He worked as a farm labourer for Pearson Marsden. With Service number 34787 he was killed by a sniper on Gordon Wood, west of La Selle river. He was buried at St Aubert British Military Cemetery aged 19 (BEcho 8Nov1918 {p} SD38 WGBE France 270)

Son of Mr. & Mrs. James Henry Walker, he lived at 18 Toothill Bank, Rastrick and worked for W Wood & Sons, Holme Farm, Toothill. James enlisted in June 1915 with service number L/28110. He suffered a gunshot wound to the head in September 1916. He was killed while unsuccessfully trying to put out a fire in an ammunition dump, Aged 19 (BEcho 24 Aug1917 {p} SD2)